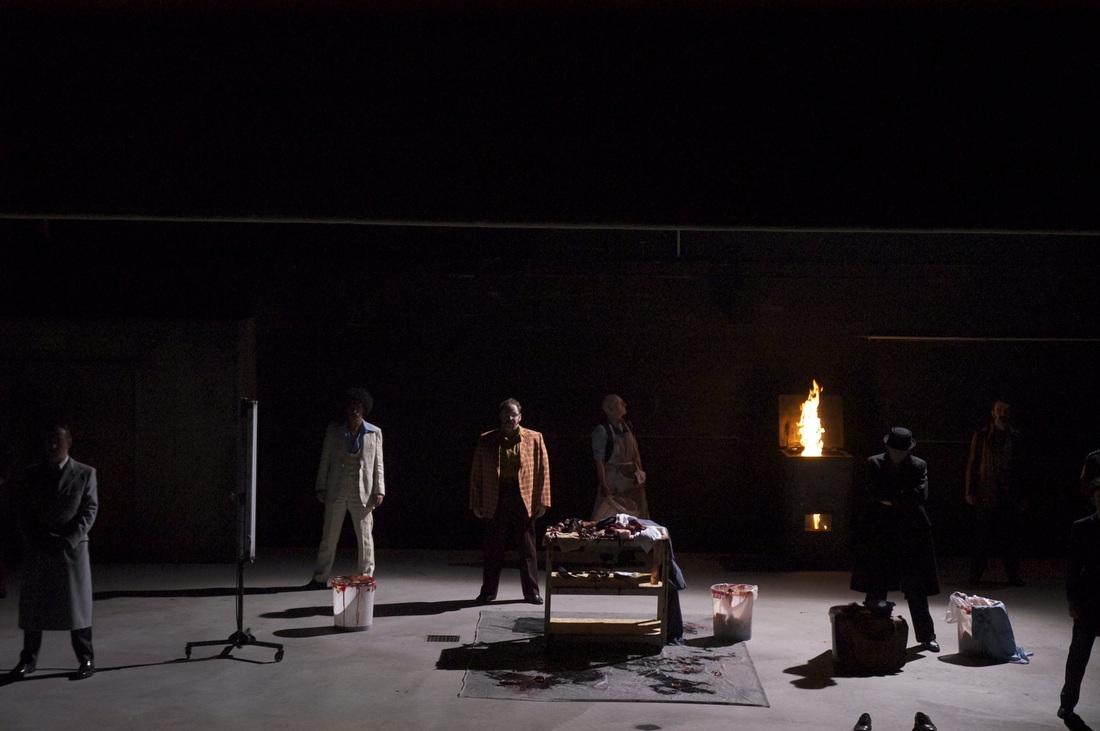 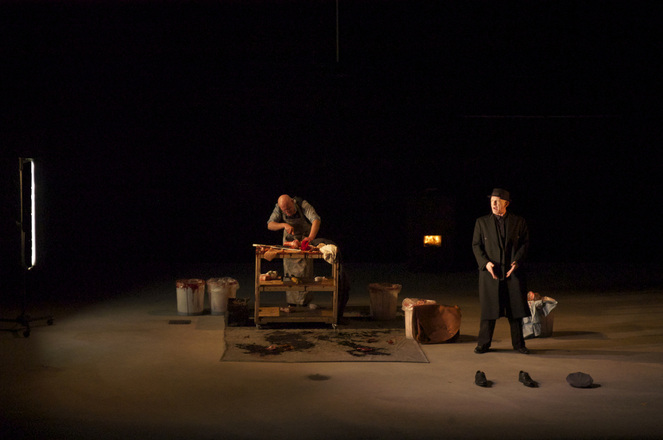 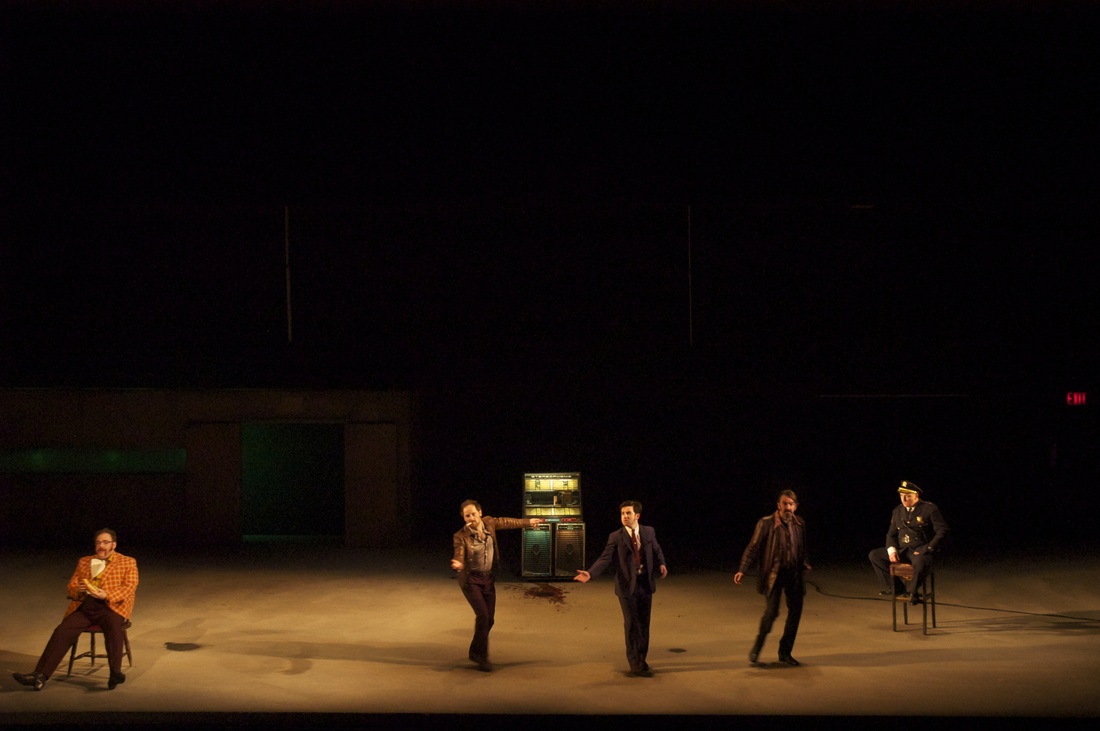 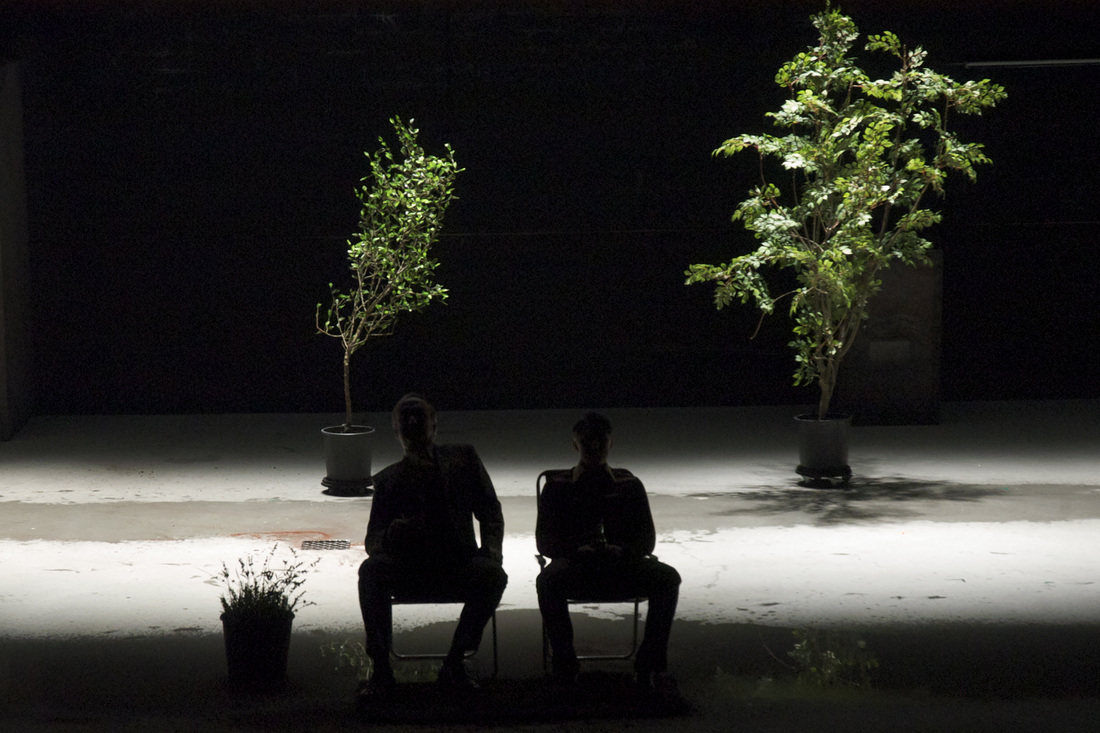 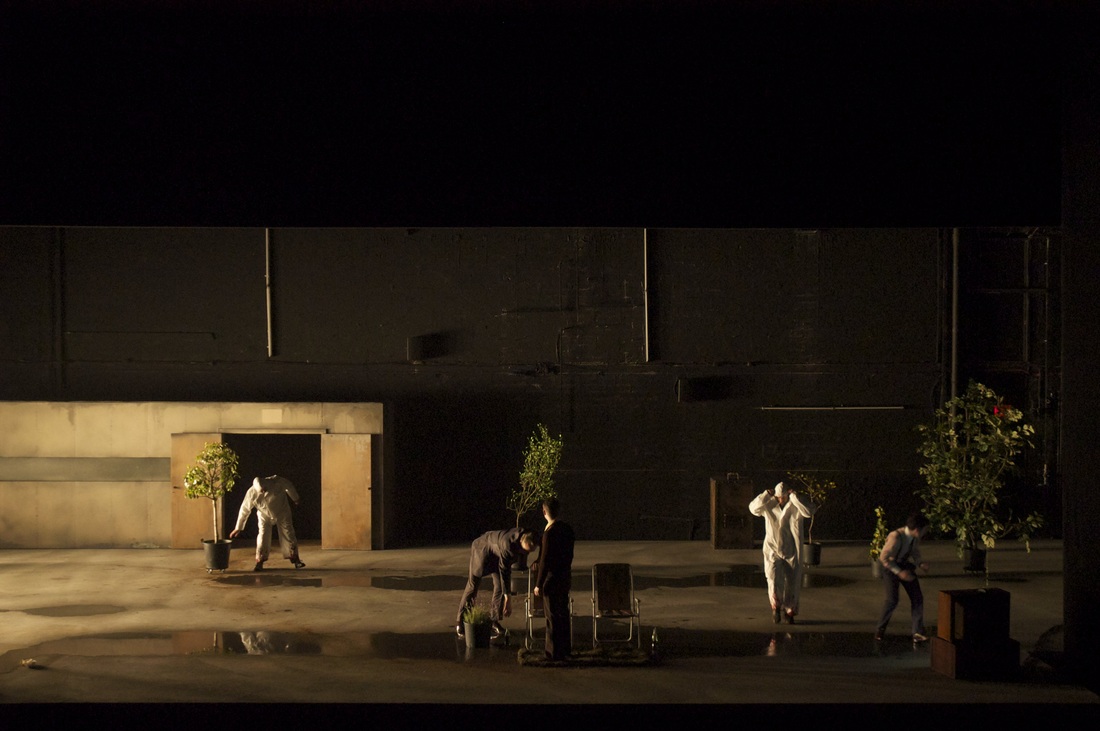 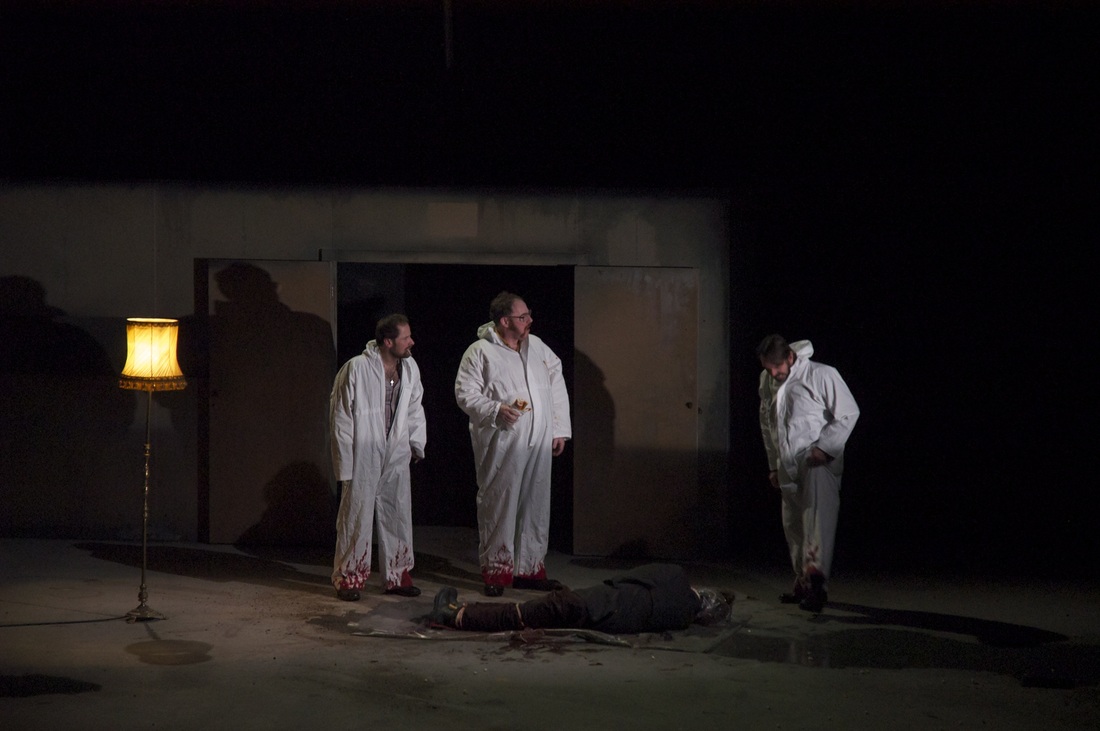 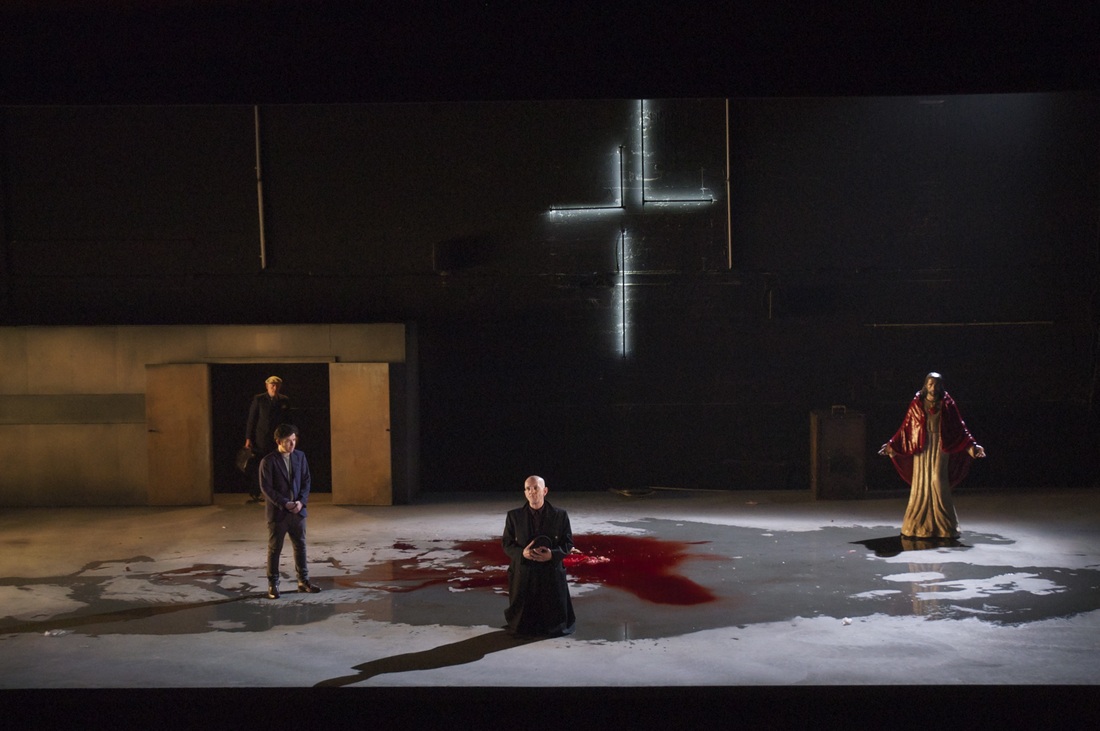 "We created the 'new' English," boasts a character in Drum Belly, Richard Dormer’s visceral new play about the Irish-American mob in 1960s New York. Example? Slán, we’re told, evolved into the colloquial ‘so long’ as the Irish worked to merge into, and then ultimately helped construct, American culture. Without even realising it, another character remarks, they’ve been speaking Irish all their life.

The transmutation of Irish language words and phrases into the linguistic stew of American idiom serves as a distinctive metaphor for what happened as succeeding generations of Irish immigrants became more and more distanced, in time and space, from the physical reality of Ireland. Signifiers of the old country remained, like artifacts of an ancient civilization that are no longer anchored to a specific time and place. In Dormer’s play such signifiers have morphed into something startlingly different, totems around which a deadly nostalgia for an imagined Ireland have grown.

It’s 1969, the summer of the Apollo 11 moon landing, and Gulliver Sullivan’s (Declan Conlon) gang out of Brooklyn has just made peace with its Italian competitors. Cold, calculating and brutally efficient in running his gangland empire, Sullivan has taken in his young nephew Bobby (Ryan McParland), fresh off the boat from Belfast and seemingly shell-shocked by the escalating violence there. When the $100,000 the Italians have paid Sullivan as guarantee goes missing, the hunt is on to find who’s taken it. It’s not long before Bobby is exposed to the casual violence enacted by Sullivan and his cronies, as enemies are threatened, beaten or simply eliminated.

While commonplace brutality typifies Sullivan and his men, it’s their overweening expressions of Irishness that really bind them all together. Most of them have never actually been to the island of Ireland, and their knowledge of the country consists of rehashed historical tropes they hold fanatically close to their hearts. The hardships of the Famine are brought up repeatedly almost as an excuse for the gang’s brutality, as if that atrocity had specifically happened to them only a week ago rather than almost century before some of them were even born.

Dormer draws from a range of well-worn representations of mob life from popular culture. Anyone familiar with The Godfather, Goodfellas or The Sopranos will immediately recognize the slick dialogue, wisecracks and vague discussions of family honour sprinkled throughout Dormer’s script. The trick Dormer pulls off convincingly, with the help of director Sean Holmes, is to go beyond the crime syndicate clichés and turn a tightly plotted mystery into a meditation on the amorphous nature of national and cultural identity. Holmes also takes the right approach in making no attempt to offer a detailed, studied realism to the world of the play. Rather, Dormer’s razor sharp, telegraphic language is presented at times not as mere naturalistic dialogue, but almost as pure chorale rhythm, a formal exercise that immediately heightens the play’s brash theatricality.


There’s also something downright Shakespearean in the way Holmes and set designer Paul Wills use the Abbey’s wide-open stage. Fake blood flows liberally, pooling around grating and smeared from scene to scene until it streaks from one corner of the playing area to the other. Chairs, tables, lights, a jukebox and other detritus are dragged to and fro by cast members to make up Sullivan’s office or a local bar. Paul Keogan’s lighting paints the empty space perfectly, conjuring up a grimy tenement basement one minute and a kitschy diner the next. Christopher Shutt’s sound design underscores the action subtly but effectively, never overpowering the scene but infecting the proceedings with a pervasive uneasiness. Eimer Ní Mhaoldomhnaigh’s costuming is totemic in its conjuring of the familiar gangland archetypes, at once authentic and broadly theatrical. The overall effect produced by Holmes and his team is exhilarating, seeing how this use of theatrical minimalism turns the stately Abbey stage into a scene-shifting abattoir.

And enough cannot be said about Holme’s dazzling cast. The ensemble is top-notch, lead by an imperious Conlon whose Sullivan is a portrait of smoldering violence. McParland’s Bobby, who spends much of his time on stage silently tracking the machinations of his uncle’s henchmen, embodies an eerie menace that justifiably explodes later on. Gary Lydon conveys a delightful shiftiness as the corrupt chief of police. Phelim Drew, Ronan Leahy and David Ganly are a hoot to watch as Sullivan’s ne’er do well employees, and Ciarán O’Brien is convincing as Sullivan’s loyal lieutenant, oscillating between a slick smugness and true vulnerability. Gerard Byrne’s presence as a taciturn butcher, though brief, is keenly felt, while Karl Shiels appearance as a twitchy snitch in the latter half of the play treads carefully the line between cartoonish stereotype and crafted characterization. Lastly, Liam Carney’s Harvey Marr (the play’s eponymous Drum Belly) brings a genuine pathos that’s badly needed, especially as the body count begins to rise. It’s hard to imagine a better group of actors tackling this material, and doing it with such relish.

This is a fine production of an extremely well crafted play, and it hardly puts a foot wrong.

Jesse Weaver completed his doctoral thesis at University College Cork in 2011. His research focus was on the changing roles of the playwright in Irish theatre production from 1980 to 2010.