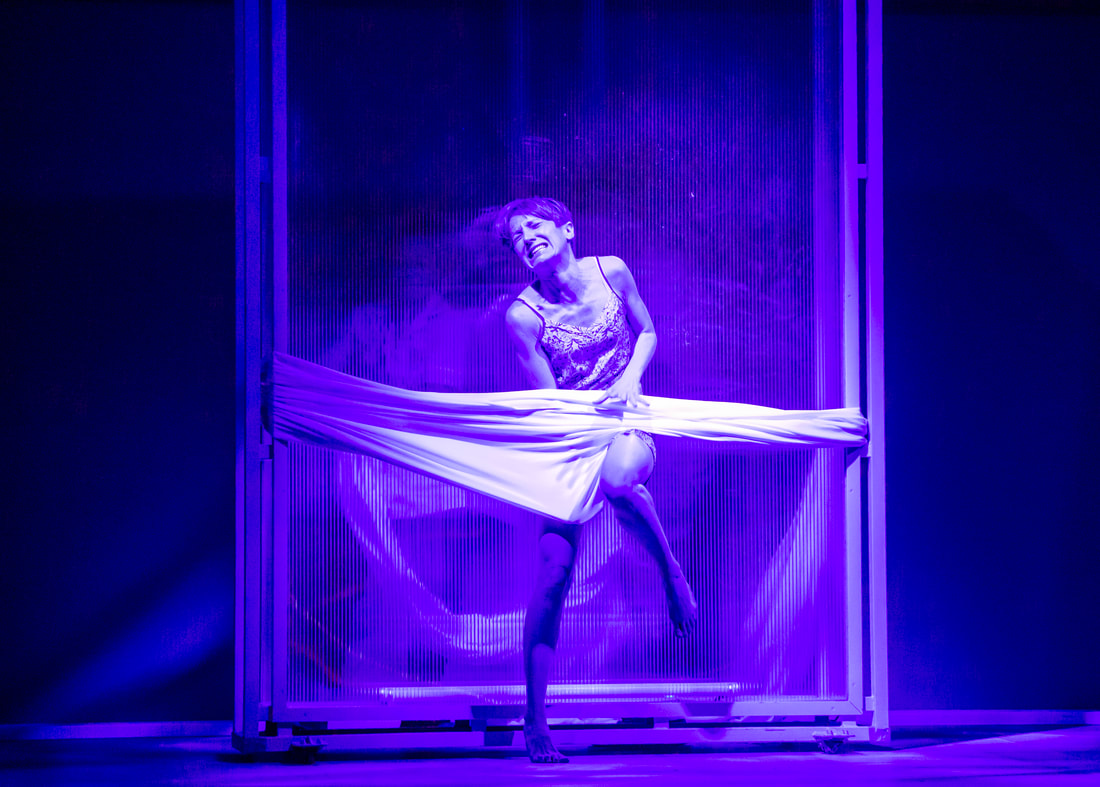 Polly Frame as Clare. Photo © Tristram Kenton.
I Think We Are Alone
​at Theatre Royal Stratford East
ReviewMARCH 1, 2020 LAST UPDATED: MARCH 1, 2020 12:32 PM BY MARY BEER
Sally Abbott’s I Think We Are Alone is a simple, naturalistic and rather beautiful play about feelings and families. Refreshingly, it does not attempt to subvert theatrical forms nor beguile with meta-philosophical concepts. Tightly plotted and pacey, it takes us through six intertwined lives and emotions at key moments of love, loss and redemption. Although this play is enacted via a series of vignettes that create a sense of swirling montage of human bonds and interactions, rather than in a straight linear narrative structure, the story-telling is largely rooted in traditions of realism and it works. The stories, in their universality, are able to resonate and connect thanks to this play’s highly crafted and uncluttered dramatic essence.
Although Kathy Burke and Scott Graham’s staging has expressionistic moments and relies on a dynamic set (by Morgan Large) of a series of glass box walls on wheels that adapt rapidly to create different spaces (with wonderful light-painting and mood-shaping from Paul Keogan’s lighting design), most scenes are short moments of dialogue between characters at key reunions or critical life/death moments. Masterfully, Abbott’s writing is economical without being sparse. She creates warmth, jeopardy, tragedy and just the right amount of exposition to draw us in; eliciting plenty of belly laughs and more than a few sniffles and tears.
The mother-son dynamic of Josie (Chizzy Akudolu) and Manny (Caleb Robert) is exceptionally affecting thanks in no small part to Akudolu’s outstanding comic timing and Robert’s impressive range. The entire cast offers strong performances requiring wit and emotional vulnerability. Burke and Graham’s direction is sharp and skilled; their canny use of props to show us the overwhelming world of Ange’s life as a hospice nurse is particularly adept.
Whilst this play is in many ways an uplifting humanistic drama, it is fitting for its premiere at Joan Littlewood’s legendary theatre, that it also pulls no punches from moments of working-class rage that just need to be said and are indeed said very well. However, unlike many a polemic of despair preaching to the converted, I Think We Are Alone takes us on a journey that is about connections of all and every kind; without sanctimony or sentimentality. This play is a dramatic triumph thanks to truthful and courageous writing with performances and staging to match.