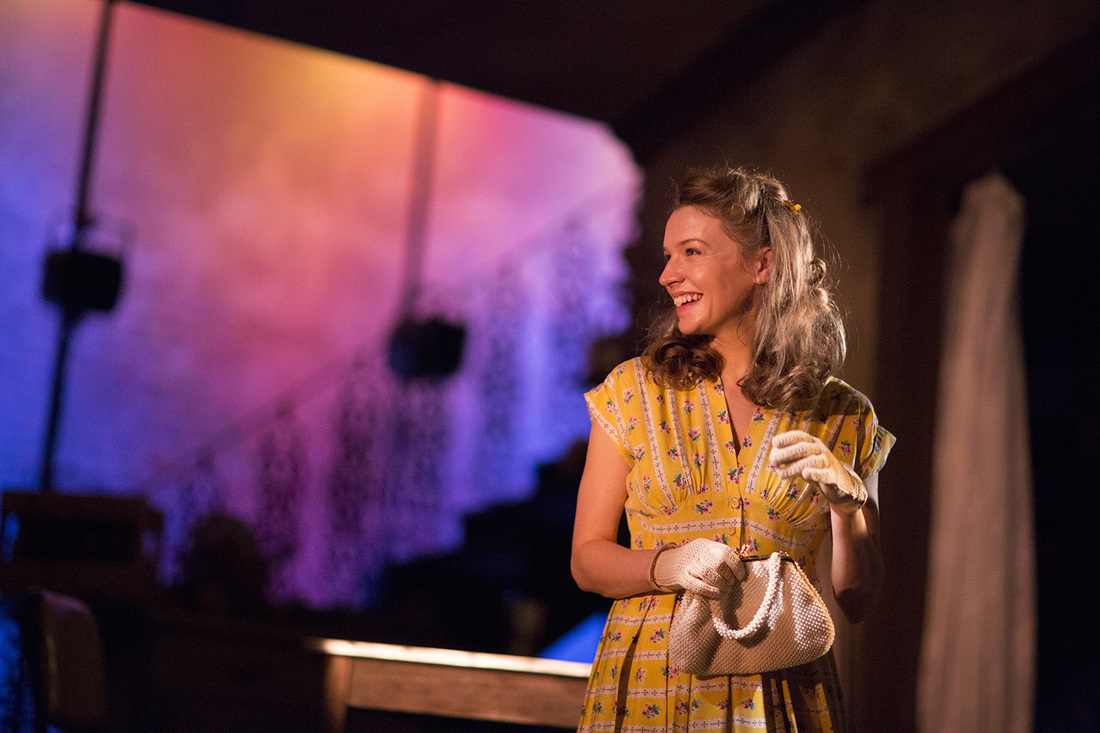 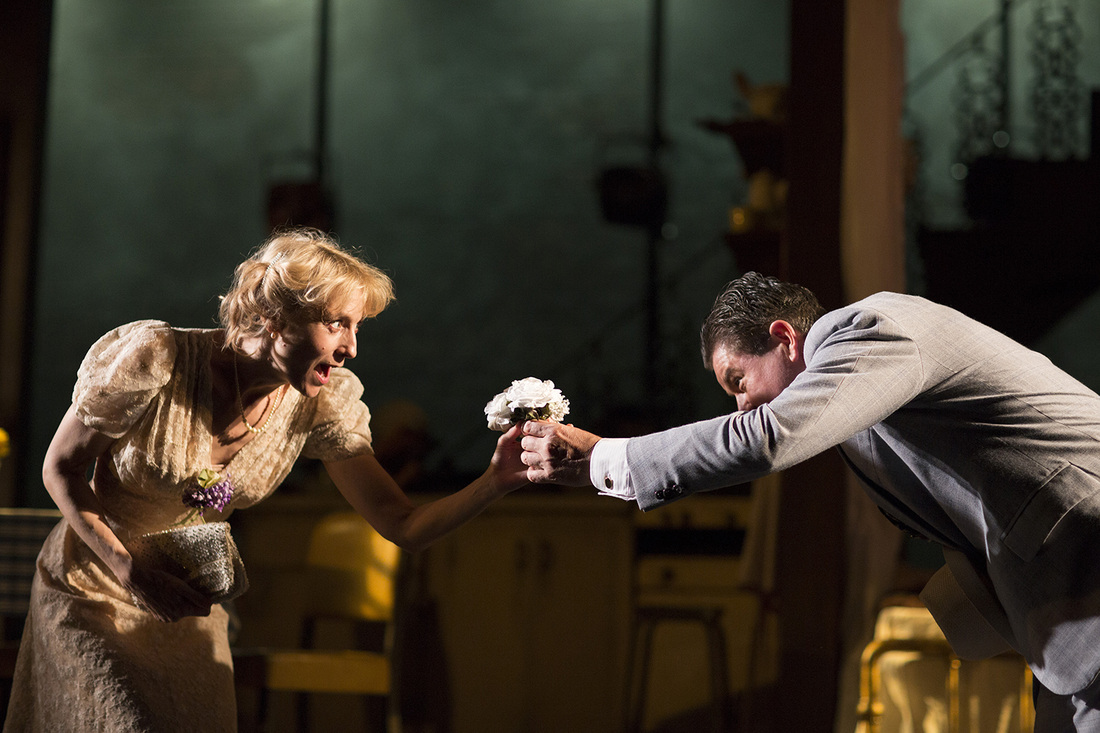 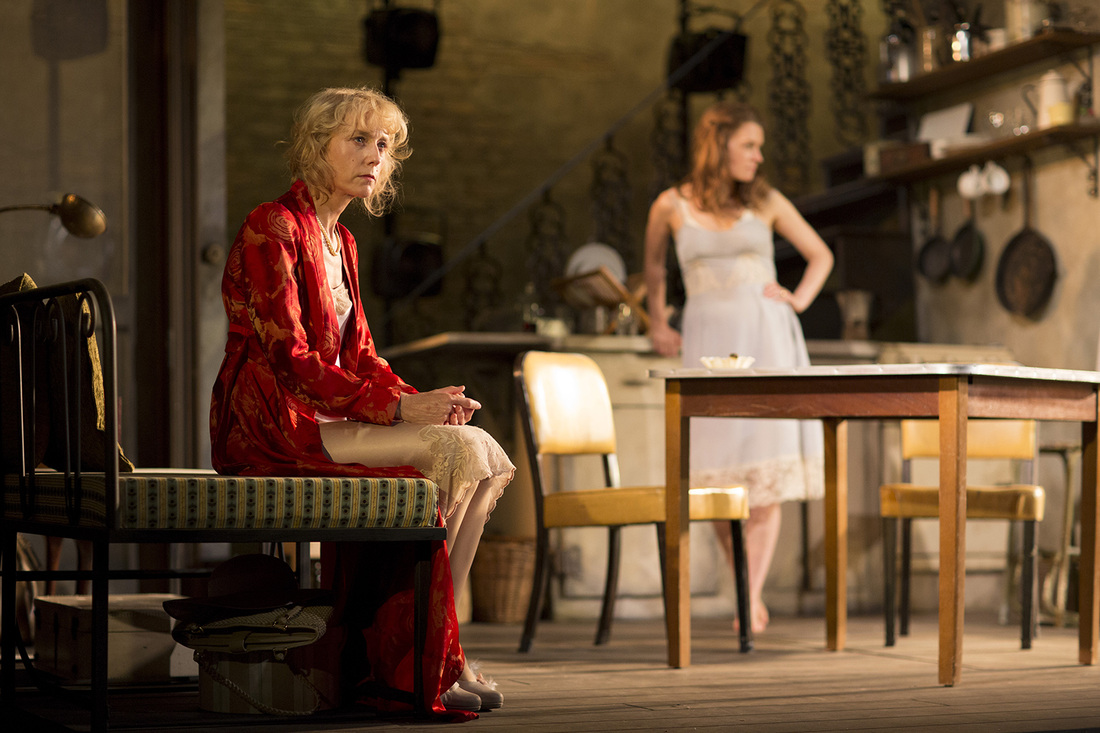 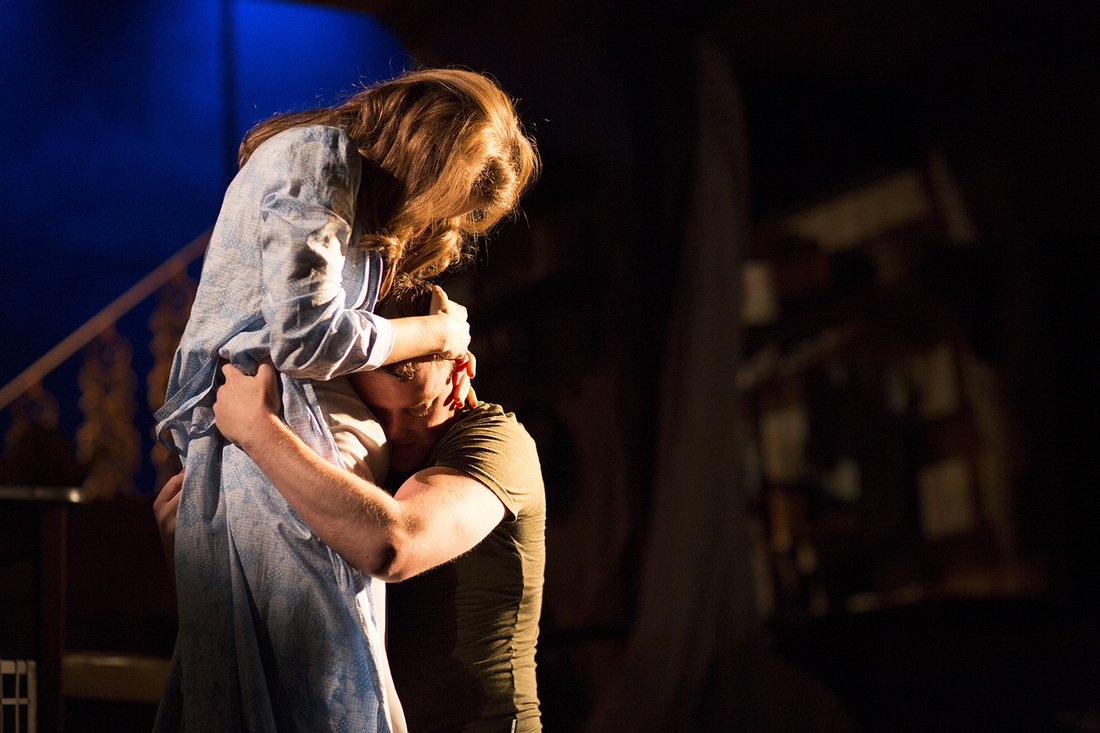 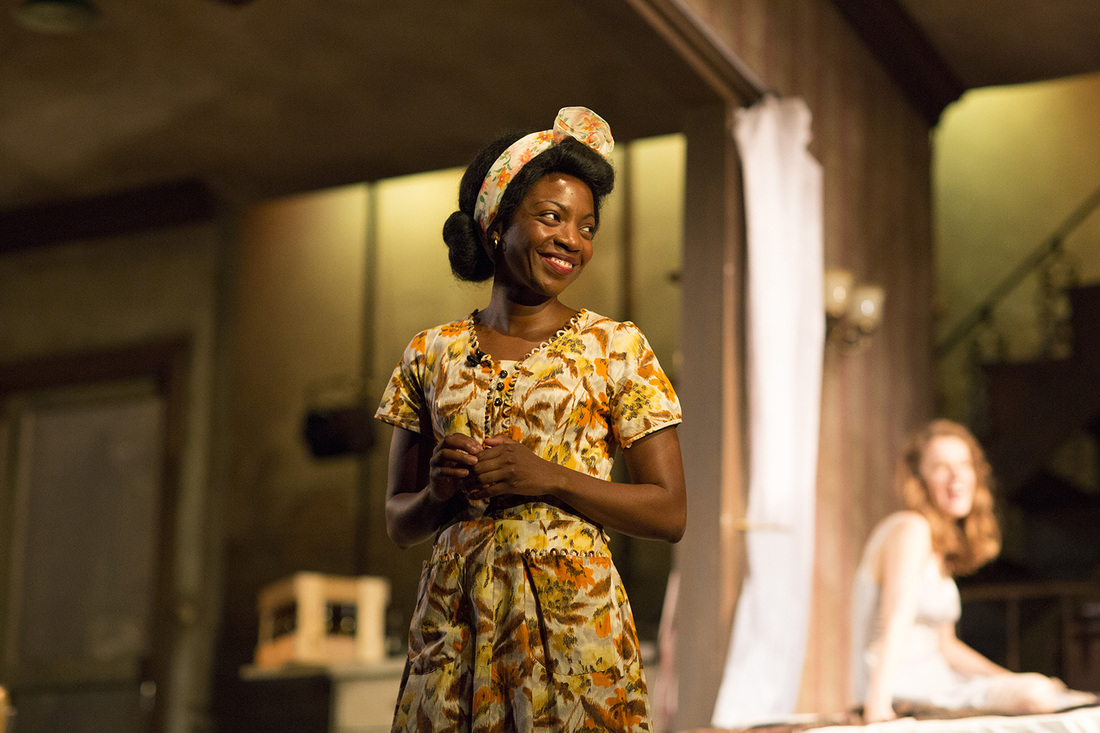 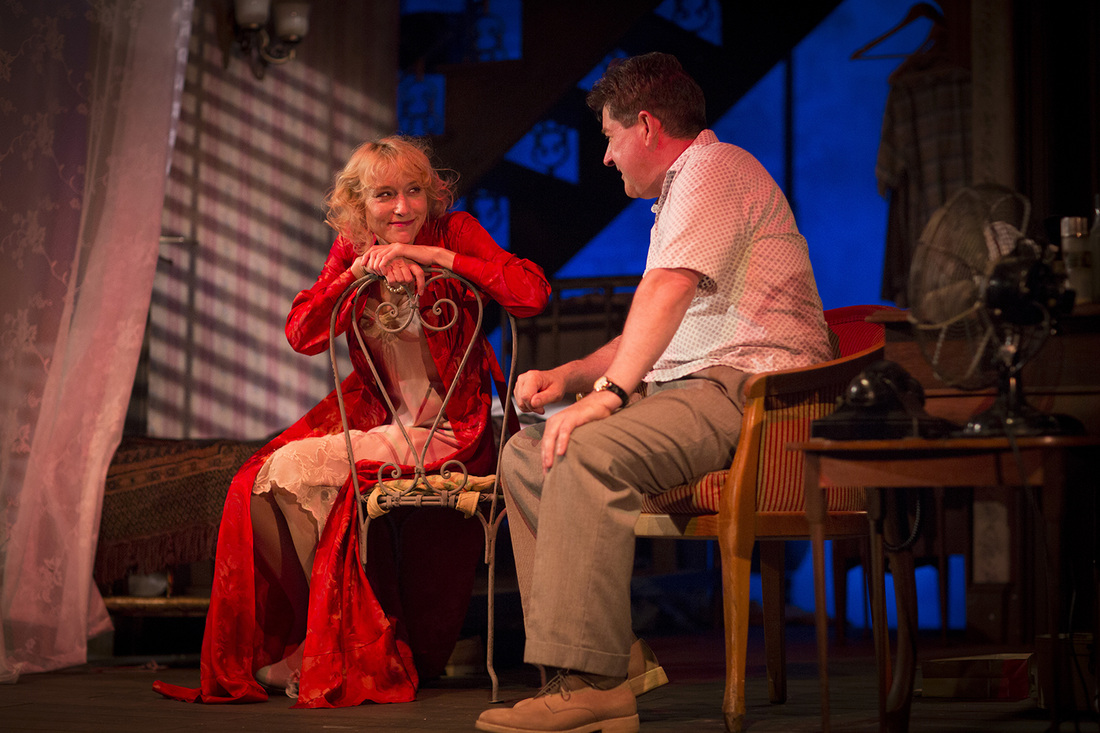 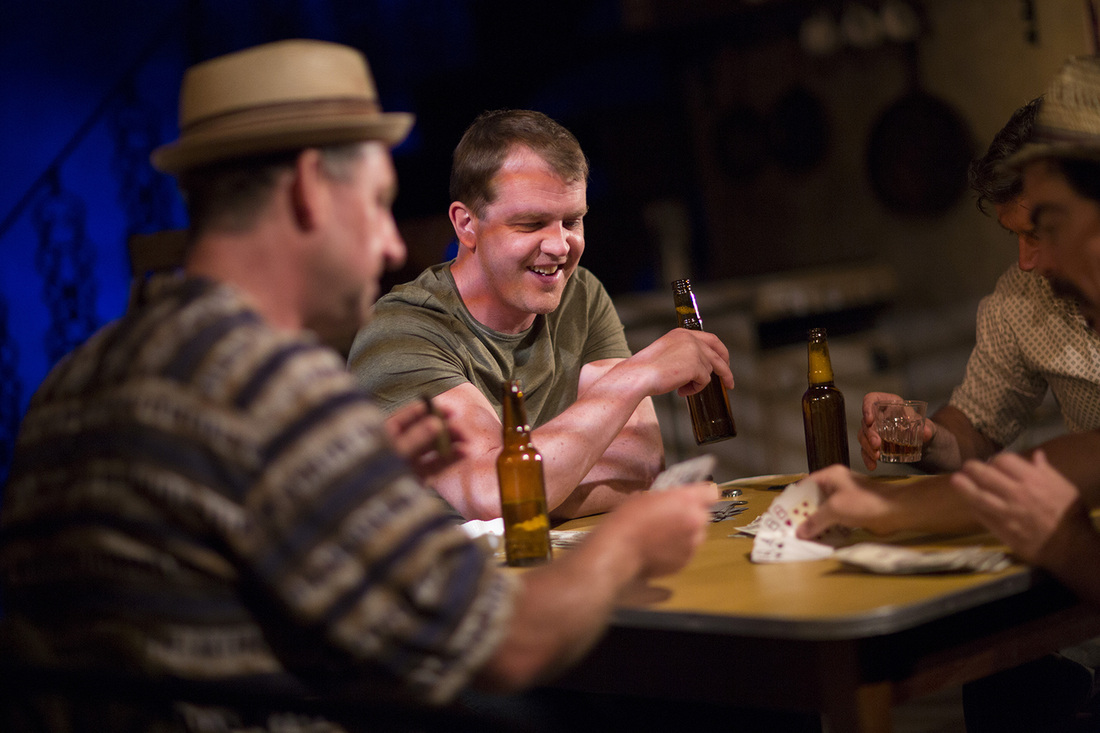 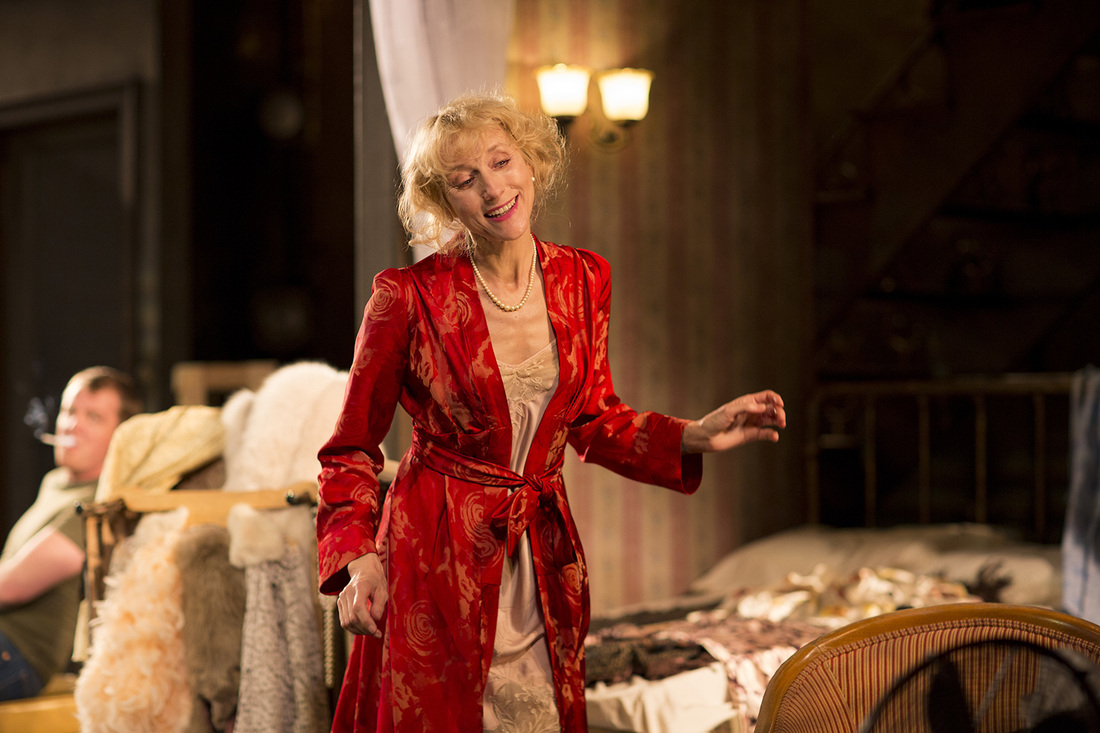 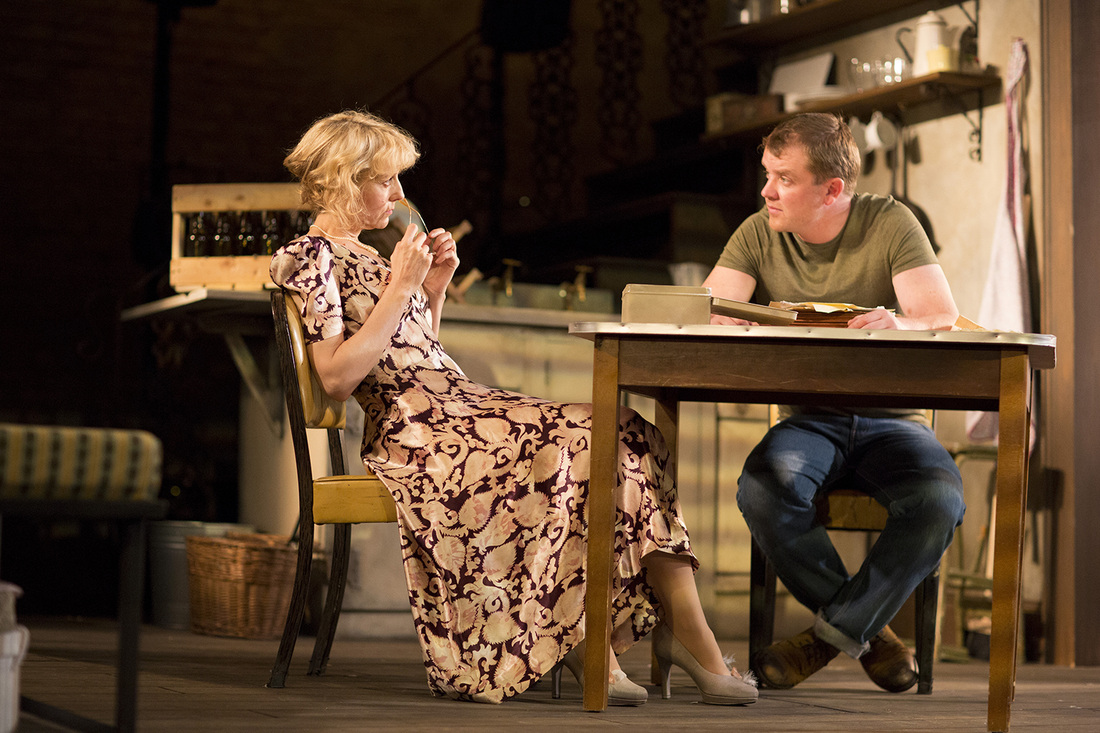 
Light is a central metaphor in Tennessee Williams's celebrated play, so it seems apt that this production focuses on illumination. American director Ethan McSweeny subtly rebalances its characterisations and shifting sympathies: instead of extreme polarisation between the lead characters of Stanley Kowalski, his pregnant wife, Stella, and her visiting sister, Blanche DuBois, we are shown a more complex and affecting picture. While the central performance of Lia Williams as Blanche is outstanding, it is supported by a fine ensemble cast and a production in which every detail has been carefully choreographed.

Lee Savage's design gives an exposed view of the Kowalski's two-room apartment in 1940s New Orleans, while Paul Keogan's lighting moves through rich crimson and purple tones. Scene changes are marked by live clarinet and snatches of blues songs, creating a heightened Deep South of the mind. This is the habitat of the exotic Blanche, clinging to illusions and shielding her face from the light, while Stanley is determined to expose her as a fantasist and a liar. Garrett Lombard's restrained Stanley plays down machismo in favour of sarcasm, which makes his outbursts of violence all the more shocking. Denis Conway brings dignity to Blanche's usually pathetic would-be beau, Mitch; his moments with her reveal the one thing these two have in common: loneliness.

Williams' Blanche is dazzling: one moment a diva, the next calculating and ironic, gambling with her own life. Spying an opportunity for escape, she tries out all her charms on Mitch, in a performance of femininity that proves exhausting: "I am played out", she admits. Even at the end, she seems too self-aware to be mad; perhaps she goes along with her incarceration in an asylum because she has simply had enough. Either way, she is magnificently regal to the last, while it is Stella who is wretched. In Catherine Walker's grieving portrayal, Stella knows she must go on living with Stanley – and with herself.


Was there ever a writer who shone a light on desire and despair as well as Tennessee Williams? In A Streetcar Named Desire he throws the sensual and spiritual aspects of sexuality into opposition, but the intensity of its emotional register is easy to parody.

Ethan McSweeny’s gripping production at the Gate Theatre, however, is a model of effective restraint. An evocative score (performed by Esosa Ighodaro and Conor Sheil) and an exposed theatrical frame hold the audience at a distance from the action and mute the threatened melodrama. However, stunning performances from the ensemble cast ensure that the lyrical play retains its full emotional power.

What makes the lead performances so compelling is that each actor subtly plays their character against type. It would be easy, for example, to play the conflict between Blanche and Stanley as a consequence of animal sexual attraction, but in Lia Williams’s and Garrett Lombard’s performances there is as much repulsion as attraction between the pair. Williams’s Blanche displays an acute sense of her own ridiculousness, which only tips over into true delusion when Stanley insists on exposing her past.

Lombard’s cruelty, meanwhile, is forced by humiliation rather than perversity. Catherine Walker’s pragmatic Stella is the peacemaker gently attempting to make each see the other’s perspective.

What is really at stake in McSweeny’s production is not just desire but two different ways of seeing the world, as Blanche’s idealism is gradually eroded by Stanley’s realism. This brings a different sort of brutality to the rape scene, which is presented in a stylised series of quick tableaux that dampens the violence but not the sense of violation.

Paul Keogan’s lighting is particularly important here, eschewing naturalism for the illumination of psychological states instead. The final scene exposes the Kowalski flat in all its merciless shabbiness, emphasising Stanley’s victory – the triumph of reality – but it is not just Blanche who suffers, and Walker’s moving tribute to her sister in the final moments makes the tragedy her own.

A Streetcar Named Desire is more than three hours long, but there isn’t a moment when it is less than compelling. In this fine production “an hour isn’t just an hour, but a little piece of eternity”. Until September 21st

If your experience of Tennessee Williams’ 1947 play is the foregrounding of Stanley Kowalski’s sweaty singlet, as per Elia Kazan's 1951 film, then you’re in for an awakening. The fetishisation of the youthful Brando began on Broadway in the play's maiden run, and has become a defining characteristic not only of his own mythos, but arguably that of the entire text. In a way it seems appropriate, given that in Streetcar the illusions of the feminine are ground underfoot by the realistic masculine. It’s easy to make the mistake that Blanche is nothing but a pathetic, man-eating, manipulative, soulless siren, yet despite all that, and more — her childish horror of ageing, and her ready acknowledgment that more often than not, she plays fast and loose with the truth — the depth of her decline is pure abjection, and is correctly put centre stage in this production, beautifully orchestrated by director Ethan McSweeny.

‘Orchestrated’ because here, Williams’ dangerous text is approached as a symphony – ‘dangerous’ because, riddled with italics and exclamation marks as it is, the script is an invitation to high-doh melodrama. Indeed, it takes some time for a modern ear to adjust to the breathless, relentless tone of the opening moments between Blanche (Lia Williams) and Stella (Catherine Walker): it’s a deluge of emoting, of cross talk, of half-finished thoughts and ideas and confessions that goes beyond the giddiness of sisterly reunion, and is immediately recognisable as style. There is room, however, for deep silences, and the first of these – of the several that punctuate the production – comes just as the audience has begun to adapt to the fever pitch that Blanche brings to the scene. The deep, freighted, and yes, dangerous silence that falls between the sisters, following a truth perhaps too nearly approached, is so disturbing that it is a relief when Blanche picks up her cue to fill the void and begins all over again.

That first silence is a revelation: the mark of a director who knows how to pace the beats of a play, and since we are in for the long haul – three hours and a bit – we are, thankfully, in calm, confident, creative hands. This idea of playing on the musicality of the text, of emphasising its rhythms and movements, is further extrapolated through the use of live songs performed by vocalist Esosa Ighodaro and Conor Sheil on clarinet. Nominally employed to cover what could have been pace-destroying scene changes, the music enlivens and underscores the atmosphere. We are in a very specific place, and its soundtrack is comprised of the mournfully hopeful elegies of gospel and soul.

Set in a dodgy quarter of New Orleans, Blanche DuBois arrives on her sister Stella's doorstep, claiming a leave of absence from her duties as high school English teacher in their hometown of Laurel, Mississippi. Her high-maintenance demeanour, and her tendency towards fabulation infuriates Stella’s husband Stanley; as played by Garrett Lombard, he is as over-articulated a specimen of raw masculinity as you may ever live to see. He is the pauper to Blanche’s princess, and the bass notes of aggression and violence in Lombard's voice and his body thrum with inevitability; despite his seemingly monolithic confidence, Lombard's Kowalski is on the defensive from the get-go, an essential weakness that Walker's Stella senses on some level, as she prods him the way one might a lion in a cage, knowing it's a power struggle she's going to lose, yet helplessly in thrall to the beast. All of the characters, in the writing and in performances – from Steve Blount and Marion O'Dwyer's squabbling neighbours, to Denis Conway's mother-fixated sad sack – seem to know their limitations, push the boundaries a little, and then retreat back into their familiar surroundings.

Lee Savage's set is cramped, lively, and not quite as sordid as Blanche would have us believe; like everything else, it's merely a reflection of her own perception of how far she's fallen: every time she thinks it's gotten as bad as it can get, it gets worse. How her narcissistic, mendacious behaviours translate into relatable human being is a glorious confluence of direction, writing and performance: Lia Williams is spectacular. Her every gesture is weighted with the biography of a woman who was born and bred to be an object of desire, and whose reality has not meshed with that passive directive. Raised to be sufficient only unto her feminine self, when that femininity failed in her youthful marriage, that was the death knell. Taking her passions into her own hands, yet unequipped to do so, is one of the many choices that led to the disintegration of Blanche’s spirit.

Watching Williams embody all of this and more is breathtaking, exhausting, and heartbreaking. She runs up and down the scale of Blanche’s quirks and ticks – the exuberance that is dazzling and also inappropriate; the deliciousness of her demeanour as she spins yet another lie; the hand flying to her face to shield it from the harshness of the light; the bleakness that steals across that face when she tells the truth. When she cries "I want a rest!", we don’t hear the overwrought italics, the exclamation point: we hear, as we heard in the silence in the very first scene, the ring of cold, hard, desperate truth.

Playwright Williams is dealing in truths, but in a profoundly empathetic way. The lack of judgment with which he presents each character, the respect with which McSweeny directs them, and the honesty of the performances is quite humbling, a novel sensation to experience as a theatergoer. Empathetic connections are hopefully par for the play-going course, but the feeling of having been allowed to witness the truthful human experience of beings held in thrall to their own perceptions of themselves and to other human beings, was the perfect demonstration of the whole point of the theatrical experience — the things that happen between a cast and an audience in the dark that sort of make everything else seem unimportant.